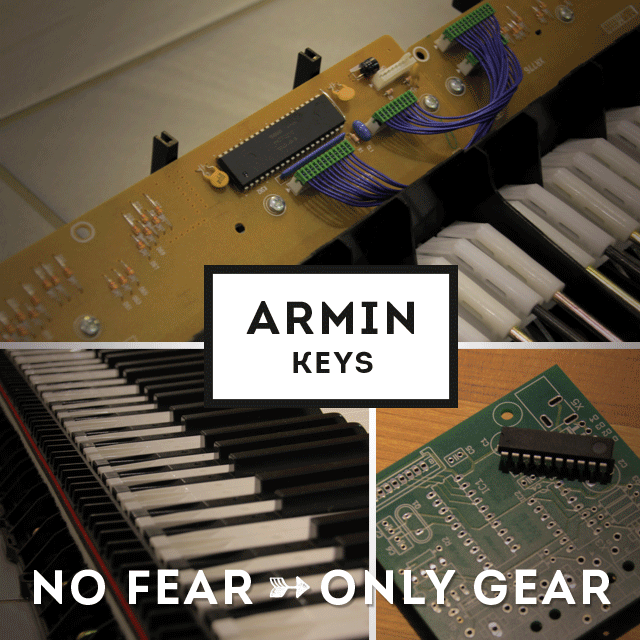 MIDIfying a YMZ702 based keyboard

What is this about?

Maybe electronic experts with some DIY ambitions in the fields of music synthesizers or MIDI sometimes think about building their own keyboard or when disassembling an old keyboard you thought the keyboard itself still has some value and should be re-used for any new project instead of throwing everything away.

Indeed, keyboards by Yamaha – used in e-pianos or synthesizers – offer a very realistic feeling and if you ever had the chance to disassemble a keyboard from any other manufacturer maybe identified that most of the keyboards inside are producedby Yamaha. e.g. Korg offers instruments containing such keyboards from Yamaha.

While analyzing a Yamaha keyboard, then you’ll be surprised about the low number of connecting pins to the main electronics and the PCB on the keyboard is mainly based on an interesting device called YMZ 702-D. This design looks really very nice and invited to any kind of DIY project. But how to teach it MIDI? And that’s exactly what this article is about…

When digging into the details, some reverse engineering is needed to understand, which pin from the keyboard’s PCB to the main PCB has got which function. Any kind of datasheet of the YMZ 702-D was not available on the internet. The only thing which was available were some service manuals of a few Yamaha e-pianos like the CP-90 E, which uses the very nice GHD88 keyboard with excellent weighted keys. On top of this I found the website of Paul Banks. This smart guy already started with some reverse engineering activities and he was so kind to document everything which he did and disclosed a PDF on his website. This PDF is something like a datasheet for the YMZ 702-D and contains some very helpful details.

As Paul has written in his documentation, the YMZ702 works with 5V DC and after powering-up the device there is some serial initialization sequence necessary on pin 24. Unfortunately, the exact meaning of that sequence could not be decoded, but it looks like synchronous communication with about 100kBaud, but with an underlying clock information. Even when not understanding the details of the communication, until you’re “re-drawing” this sequence exactly in the way Paul described, the device starts to work like this:

After initialization is done the YMZ702 provides a synchronous serial communication with 1MHz data rate on pin 23. This data can be read e.g. by using the input of a conventional SPI interface (MOSI on a slave or MISO on a SPI master device). The YMZ702 provides the data clock signal on pin 25 which should be connected to the SCLK of the SPI interface. Any single transmitted data byte coming from the YMZ702 need to be acknowledged by a short LO pulse on pin 24, which was previously used for the initialization sequence, before the device transmits the next data byte (attention: this is not described correctly in Paul’s documentation). One idiosyncrasy is that the funny guys from Yamaha are using the wrong bit order compared to SPI. That means the LSB is coming first, so you need to swap the bit order before processing the incoming data.

The device transmits three data bytes per pressed or released key. The key part of my reverse engineering activity was to understand the meaning of the three bytes (see table below). Summarized, the data contains a number for the key, a value for the key velocity, the key’s direction (pressed or released) and the amount of currently pressed keys.

The transmitted key number already fits perfect to the MIDI specification like 0x15hex for the lowest A0 key on the left side of the GHD88 keyboard, so no need for any post-processing here. The value for the key velocity is an 8 bit upwards counter which means high velocity generates small values. This definitely needs some post processing and you need to play a bit with the characteristics for realizing the best possible control or feeling of the keyboard. Interestingly, released keys are also providing a velocity value. This is quite nice, because the MIDI specification provides two options for transmitting a released key – one is the Note On event with velocity 0 (common use in the MIDI world) and the option is the Note Off event, where you indeed can transmit a release velocity. Unfortunately, most synthesizers or keyboards do not use the release velocity, but luckily my Roland JD990 understands this and can control the envelopes by this value :-).

After the different pins and the data stream is understood, you just need any tiny controller which contains a SPI interface as well as an UART to translate the YMZ702 data into useful MIDI messages.

For this I took an ATMEL ATtiny4313 AVR controller which I already used a couple of time for some inline modification of MIDI data. On top of the needed SPI and UART, this device offers some useful I/O pins. In my solution I took four pins for selecting the MIDI channel, one pin as input for a Damper Pedal and two pins for switching between different characteristics of the key velocity. As the input of the UART is not used, I also implemented a MIDI merge function. Therefore my solutions also contains a MIDI-in as well as a MIDI-thru connector. This is very helpful when e.g. connecting this solution in between a rack synthesizer and another keyboard or in case of cascading multiple keyboards for building up an organ with two or more manuals.

How can I get the solution?

I provide all documentation of the hardware I developed. The schematics is available as download and can be used as an example. I used EAGLE and the project data is as well available for download. I also offer a layout proposal for the PCB I’m using. The only thing I do not provide is my software solution. The reason is quite easy, because there are lots of people around the globe steeling solutions from others and selling this which I definitely do not support. But I think everyone can easily realize his own solution based on my documentation.

If you would like to save your time or you’re not such familiar with C or Assembler, I offer a programmed controller for 15€. I also do have a few professional bare PCBs on stock which I can offer for additional 7€. If you’re interested in getting these parts or if you still have some questions, you can contact me via the contact form on our website. Please use only use German or English language – other options are not yet installed in my head 😉

WordPress Plugin Entwicklung von BST Software
We use cookies to improve the website's usability. You accept this with your visit on out site.
Got it! More information